Heike McNeil was the head cross country and distance track coach at Northwest Christian University for 13 years. She developed as a coach and led her teams to resounding success. Now, she’s stepping back from coaching at the collegiate level to focus on her teaching. But she’ll continue in a coaching capacity as she helps lead Run Hub’s spring training program for the Eugene Half Marathon and Marathon.

“I got the greatest deal, because Dustin and Run Hub has allowed me to still continue to coach and get to know and be a part of a new running community.”

Heike grew up in Europe, living in Germany and then Austria. When she was a child she joined a boys’ water polo team and started running with her parents to build her endurance. Her father worked for the United Nations and she learned through the international community about how sports were a part of the school system in America.

“I was intrigued to say the least,” Heike said. “This is what I had wanted so badly all along.”

The summer after her junior year her parents took her on a trip to the United States to visit schools. Heike ultimately accepted an academic scholarship from Linfield College. There, she walked on the cross country and track teams and fell in love with running, competing all four years.

Heike went on to earn a PhD in chemistry from the University of Oregon. During her graduate studies she worked with NASA and The Defense Advanced Research Projects Agency to develop a new material that was used in deep space probes.

She began teaching chemistry at NCU in 2004 and established an exercise science program at the school. She had just started teaching exercise physiology in 2006 when the school added several varsity sports, including cross country.

“I was asked to be the inaugural coach and one of the most incredible journeys of my life began right there,” Heike said.

“I came to coaching from the exercise physiology perspective – which is probably very non-traditional,” she added. “But to me the track was a giant experiment.”

She quickly learned that every athlete’s physiology is different. So, much like the Run Hub training program, she created an individualized plan for every one of her college athletes.

“I found that coaching really just has one principle: love your athletes,” Heike said. “Coaching in college is walking alongside young people as they are going through a critical stage of life. It is being there for them when they need something, fielding phone calls about what they should eat for dinner, helping them with decisions about their classes, their relationships and so much more.” 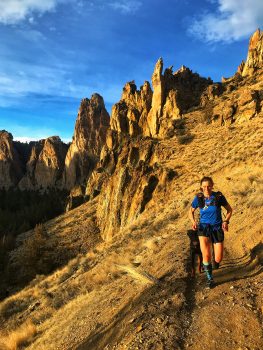 “When you love your athletes, powerful things start to happen,” she added. “They begin to trust you and they start seeing running as a gift they have been given – and they see that you can help them use this gift to their full potential.”

NCU is now one of the top distance running programs in the National Association of Intercollegiate Athletics. The teams have consistently been ranked in the top-25 nationally and the women’s cross country team won the national title in 2015.

Heike said coaching a community training program comes with a more diverse group of runners and therefore a wider variety of individual goals. But the basics of coaching are the same, she said, and she’ll push every runner to the best of their abilities.

“I love watching them hustle, hold each other to a pace, support each other and be a community,” Heike said. “As much as I can’t wait to watch them race on April 28th, I am enjoying the journey.”

As for her own love of running, Heike competed in triathlons after college and loved pushing the limits of her body. About 10 years ago she ran the 1500m at the Master’s World Championships in Sacramento but was disappointed with her finish. She vowed to train harder but ultimately had to stop running due to injury.

“The years of cross training that followed gave me some valuable perspective and healing that went beyond the broken body parts,” Heike said.

A couple years ago she signed up for the High Cascade 100-mile mountain bike race. But she promised herself she would do it differently this time around and not put so much pressure on herself. Since then Heike has signed up for trail races and is grateful to be running again.

“My best days of running are no longer the days when I hit the fastest splits, but the days when my husband and our dog get to join me and we are out on the beautiful trails our state has to offer,” she said.