Eric Finan competing in the 2019 Eugene Half Marathon.

Eric Finan is a regular runner at Run Hub’s Wednesday night community runs. He’s a mechanical engineer at a biotechnology firm in town. And, he is a qualifier for the 2020 Olympic marathon trials.

Run Hub is sponsoring Finan with gear leading up to the trials in February. The race will determine the three men and three women who will run the marathon for the United States at the Olympic Games in Tokyo. Finan qualified for the trials with a time of 2:16:42 at the 2017 US Marathon championships. To qualify for the trails, men must run a marathon in 2:19 or faster.

Finan, who is deep in marathon training, is running a tune-up race this Sunday on Vancouver Island. Called the GoodLife Fitness Victoria Marathon, Finan’s goal is to win the race with a finish time of about 2:16. Let’s wish him good luck!

Running became Finan’s sport early in life. Growing up in a small Ohio town east of Cincinnati, he first started running in middle school because his school didn’t have a soccer team. He ran cross country in high school and then went on to compete in cross country and track and field at the University of Cincinnati. As a freshman in 2008, he was the top finisher for the Bearcats at the Big East Cross Country Championships, despite battling stress fractures. His biggest accomplishment, he says, was finishing 10th at the NCAA finals on the track in the 5,000m in 2011.

One thing Finan learned as a young runner that has stuck with him: “You have to relax to run fast. Straining, both mentally and physically, will prematurely wear you down in a race.”

Finan graduated from college in 2012 with a bachelor’s degree in mechanical engineering and a MBA. In 2013, he finished with a time of 64:42 at the US half marathon championships, drawing the attention of Team USA Minnesota. Finan moved to Minnesota and spent two years training with the team and competing in several national championships, as well as various races in Europe. While he struggled with injuries during that time, he did run some of his best times, including a lifetime goal of breaking 4 minutes for the mile. He also ran PRs of 7:54 for 3k, 13:37 for 5k and 63:29 for the half marathon.

Ultimately, he connected with Ian Dobson of Team Run Eugene and moved to Oregon. In 2016, Finan qualified for the Olympic marathon trials with a fast half marathon time, but elected not to compete in order to focus on track. He came close to qualifying for the trials for the 5,000m but fell seven seconds short. In the fall of 2016, he stepped away from running full time and picked up a full-time engineering job at Thermo Fisher Scientific.

He is currently being coached by Tim Sykes, who last year was a volunteer assistant coach with University of Oregon and this fall started as head coach at Western Kentucky University. 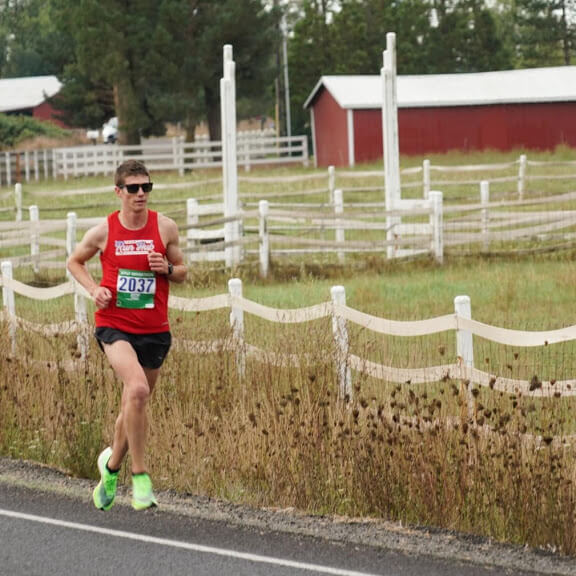 “My current marathon training cycle has been a little lower in volume but with more mixed variety of intensities and paces,” Finan said. “I have maxed out at 110 miles per week this cycle with my main workouts being on Tuesdays and Thursdays, complete with a high quality long run on Saturday.”

He also does two strength training sessions each week, which he says is a critical piece to staying healthy throughout the demands of a marathon cycle.

“Some days can get pretty long with a two-hour morning workout, 8-9 hours in the office, a strength session, and then a second run, but I’m invested in my goal of the Olympic Trials and that keeps me motivated,” Finan said.

He said he sees the two activities of running and working as complimentary.

“Training and competition provides a crucible in which I can discover the depths of who I am,” Finan said. “I take those lessons with me daily into the workplace. I often have my best ideas on easy runs to solve problems at work. Sure, my social life and weekend activities for enjoyment certainly suffer, but I’m pursuing something that I love and is incredibly rewarding.”

Finan is shooting for a top 25 finish in the Olympic trials for the marathon.

“Hopefully I have a great day and can place higher, but the state of US distance running is very good right now,” he said.

He said Run Hub has been his go-to store since arriving in Eugene in the fall of 2015.

“It became immediately evident that (Run Hub co-owners) Dustin and Kris are truly invested in the running community and wanting to see people excel both in running and in life,” Finan said. “Their generous support and enthusiasm for the running community in Eugene has been fantastic and a mainstay of my weekly running routine through the community runs on Wednesday nights.”

“Come on out, say hi, and join me sometime at the Run Hub community runs on Wednesday evenings!” he added.

⭐Nominations are open for the Best Running Stores of 2021! Nominate us!⭐ Dismiss