Leading up to the Eugene Marathon and Half Marathon, we are featuring some of our Team Run Hub athletes who have been training with the group since the end of January. If you’re interested in joining a future Team Run Hub training group, click here. Our next training program starts in August for the EWEB Run to Stay Warm. Registration will open in July.

Why did you start running? And how long have you been doing it? 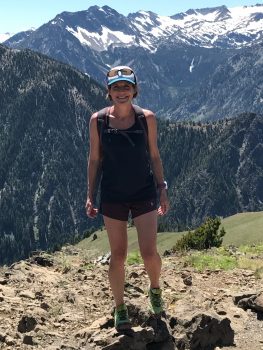 I’ve always been a hiker and could walk for miles without problem, but frankly I never felt the desire to run or to be part of an event. I envisioned they would be loud and crowded, and I was looking for quiet, contemplative time. I started running because it was an efficient way to quickly get a solid workout so that I could be stronger for downhill skiing, which I really enjoy.

I didn’t start running until a couple of years ago, and I didn’t do a race until the Race to Stay Warm 10K in November 2017. I ran that kind of on a dare, with a high school friend. We are both writer dorks, not athletes, and we kind of egged each other on. We both dreaded field days and PE. Signing up made me run in the rain and stick to it – or let my friend down. In the last couple of winters my devotion totally tanked with the weather and darkness. The race kept me going and I loved the experience. I could have gone faster or longer.

Why did you join Team Run Hub?

I knew I needed the structure of an outside group, and the expertise that the training team was offering. Another friend and I challenged each other to sign up. I’d always had a really good experience at the store and know a number of people who spoke of the supportive vibe of the community runs.

I’ve been resistant to joining groups, but Team Run Hub has made the preparation for the half really fun. There’s absolutely no judgment, and the runners range widely in experience. The encouragement that everyone offers is authentic. It’s a fantastic way to train and learn. Also, I know nothing about training, or the lingo, and the coaches have made it really easy. I just check the spreadsheet and do what they say. No excuses.

Which race are you training for? And what’s your goal for race day (could include time, feel, effort, experience, etc.)?

I’m training for the Eugene Half. When I signed up, I said my goal was to run the half and not be last. I felt like that was more aggressive than my initial goal, which was simply to finish. Now my goal is to notice something great or funny about each mile, and to finish feeling like I could do another mile.

What motivates you to run?

I feel stronger all the time, and I know that once I’m outside, I’ll be glad. I’m not sure that I get a runner’s high, but I definitely benefit from the movement and being forced to step it up throughout the winter.

What stands out as your favorite aspect of the training program so far?

The Tuesday night runs in the dark along the river are thrilling me. I love running in the dark – I’ve always been a night walker – but I would never go on the river path at night by myself. To be out in the crisp air with all these other encouraging, devoted people – that’s really a highlight for me.

What is your favorite during run fuel? Post run recovery meal?

I’m working on the fueling piece of things and in fact, that’s the hardest part of the training for me. It’s forcing me to do more for meal planning, especially in terms of timing, so I don’t end up running on a full or empty stomach. During the first time trial I had worked through lunch and forgot to eat, so I was really hungry. Someone was grilling hamburgers at the apartments by the track and I’m pretty sure that kept me moving quickly. I just wanted to be done so I could eat. It didn’t matter what.

Do you have a running mantra you repeat in your head when things get tough?

I really kind of zone out, so no. The issue I’ve had is that I’ll put my head into it to ignore it when it’s hard, and then I’ll look up and be surprised by where I am. We keep joking that I need to put money in my pocket so I can take the bus home. My family just got me an Apple Watch so I could call home for a ride, or make an SOS call. I haven’t called yet, though. I can’t run far enough to get too far away. Yet.

What is your biggest running mistake that you have made and would caution others to avoid?

I’ve been regretting not running earlier. I’ve had running friends my whole life and I never did it because I didn’t think I would be as good as they were. And it’s likely that I wouldn’t have been as fast or been able to go as far, but I didn’t even try because I didn’t want to be mediocre. The thing is that being mediocre is totally ok. It’s about strength and endurance and time spent outside. Finishing the race is going to be amazing, even if I am the last one in. 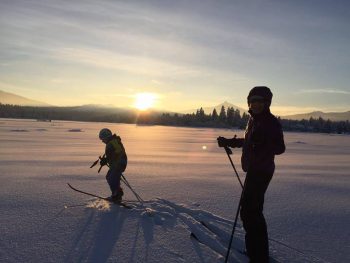 What is another activiy you enjoy when not running?

During the winter I ski – both alpine and nordic. In the summer I paddleboard. During the shoulder seasons I hike. I also keep up with a busy teenager and a 7-year-old. I definitely sleep well.

Do you have a most memorable run or workout? Or favorite place to run? If so, tell us about it. (It doesn’t have to have been during training since we’re only a few weeks in.)

I love to run trails. My favorite place is in the Deschutes National Forest on the fire roads. I just love the surface, and that I can let the dog loose. There’s a loop I love that goes through the pines and around a meadow. I’m excited to be able to go much farther now – there’s a cinder cone on my map that’s been tempting me.