In the weeks leading up to the EWEB Run to Stay Warm, the Turkey Stuffer 5K and the Holiday Half and Hustle, we’ll be introducing you to some of our Team Run Hub athletes who will talk about their goals and how their training has gone. Today, meet 37-year-old Sarah Strickler who works in Academic Scheduling at the University of Oregon. 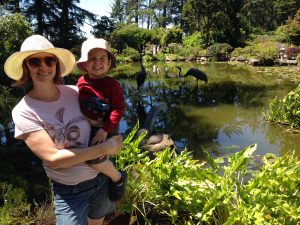 Why did you start running? How long have you been running?

I’ve been running on and off for about 20 years. I was on the JV cross country team in high school, but my running career has been sporadic since then! I joined the cross country team because some of my friends were on it. I grew up playing tennis (a spring sport at my high school), so I needed a fall sport. I was always intrigued by people who could run long distances and wanted to try it out for myself.

Why did you sign up for the Team Run Hub Training Program?

I joined the women’s beginning running group over the summer to train for the Butte to Butte and get back into running after taking a few years off and having kids. That group was a lot of fun and very supportive, and I wanted to stretch myself with a longer distance, so I signed up for the Training Program to train for the EWEB Run to Stay Warm.

What race are you training for? And what are your goals for race day?

I’m now training for the 10K in the Run to Stay Warm. I’d originally wanted to do the half marathon, but was just not able to get the long distance runs in that I knew I would need. Now I’m excited about the 10K. My goal is to run it in around 50 minutes, which would be 4 minutes faster than my Butte to Butte 10K time in July.

What stands out as your favorite part of training with a group or following a training program?

My favorite part is doing the workouts that I just know I wouldn’t do on my own. Running up Skinner’s Butte multiple times in 100 meter sections, for example…as part of a group, it’s fun, but it’s probably not something I would push myself to do on my own!

What have you struggled with this training season?

In the beginning I struggled with getting the distance runs in, which is why I decided to do the 10K rather than the half marathon. Once I made that decision I felt a lot better about my training plan! I did have to miss a couple workouts because of my kids’ schedules, and I haven’t been able to participate in Wednesday or Saturday group runs, which I would have liked to do.

Tell us about your favorite or most memorable workout/long run during this training cycle.

My favorite workout was the first time we ran up Skinner’s Butte. It was really hard, but it really felt like I was accomplishing something. And, like I said, it’s something I probably wouldn’t have done on my own!

Nice work and good luck, Sarah! Run Hub’s next coached training program will start in early 2017 in preparation for the Eugene Marathon (half and full).

Run Hub is closed to in-store shopping but is open for curbside pickup, free delivery in Eugene/Springfield and free shipping in Oregon. Call the shop at 541-344-1239 during the hours of 12-6 Monday-Saturday and 12-4 on Sundays to place an order. You can also email your requests to [email protected] All Run Hub community runs and events are temporarily cancelled. Dismiss