Zoey on the PCT: Finding My Trail Legs

After a long and restorative rest in Idylwyld, Burp King, Dirty Chocolate and I headed back up into the San Jacinto mountain range to take on the notoriously challenging Fuller Ridge. Although snowy, the section was a beautiful change of pace from the desert. 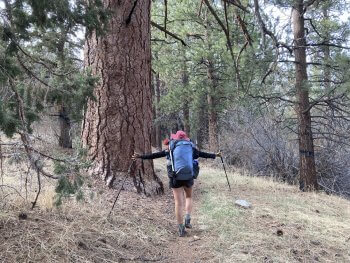 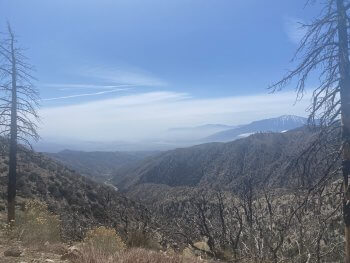 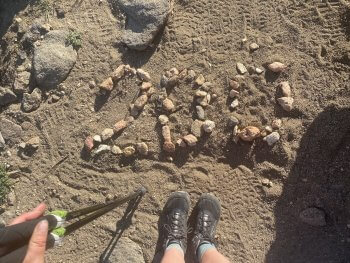 But all too soon we descended the long 6000ft descent to I-10. As the elevation dropped, the plants around us changed accordingly and blooming cacti and yucca plants returned. 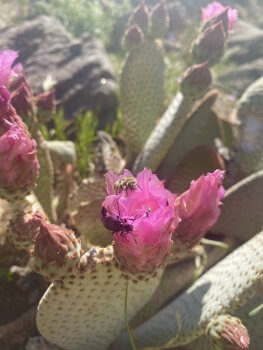 The trail was extremely exposed as we walked through the desert valley floor towards the freeway underpass. Miraculously when we reached the road we were greeted with shouts of “Hello Hikers!!” by the wonderful trail angel Mama Bear. There we gratefully rested under the overpass while enjoying cold soda, salty snacks, hot dogs and cookies!

In true PCT fashion, the next few days were spent climbing back out of the valley we just descended into. Thankfully the ascent followed an oasis of green cottonwoods and sycamores along Mission Creek. A few more days in the beautiful alpine hills and we arrived at Big Bear Lake, lucking out to even see a few wild donkeys on our morning hike to the highway!

As soon as we arrived, we headed to Grizzly Manor Cafe and wolfed down pancakes bigger than pizzas. In Big Bear Lake we had the opportunity to stay with a local trail angel and enjoy some guitar jams and an elaborate breakfast for the hikers. After a resupply in town and a lovely visit with my grandparents, I was back on trail. 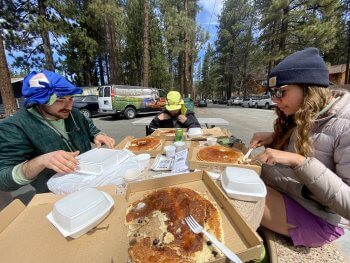 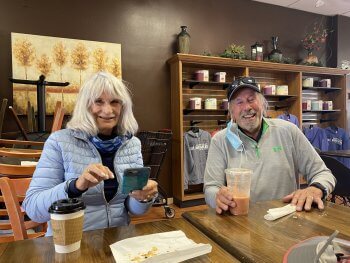 The next few days I walked alone mostly, winding through switchbacks and making my way to Deep Creek hot springs. The springs are a popular day trip for folks in the LA area. Apparently a brain eating bacteria was identified in the water but as long as you don’t submerge your head you’re all good 😅 While there I enjoyed a blissful solo 5am soak watching the sunrise behind the steam of the pool. 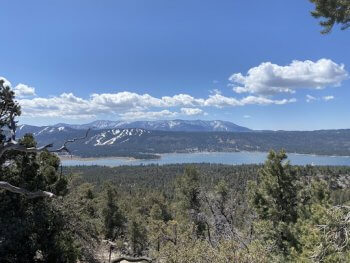 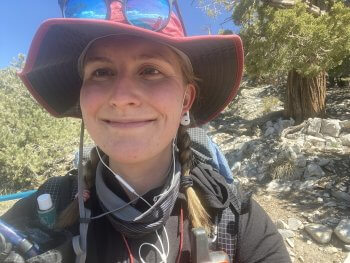 The morning walk out of Deep creek was one of the most beautiful sections yet with light spilling into the canyon. The next few days were a bit monotonous, dominated by desert bushes, gradual hills, and the occasional walk along a road. Thankfully we were all motivated by the thought of the upcoming McDonalds on trail. At Cajon pass we took a slight detour to sit in a McDonald’s parking lot for many hours making round after round in for Mcflurries, McNuggets, Fries etc. A few in the group even attempted the “McDonalds Challenge” in which you pack out enough McDonalds to carry you the next fifty miles. Oof. 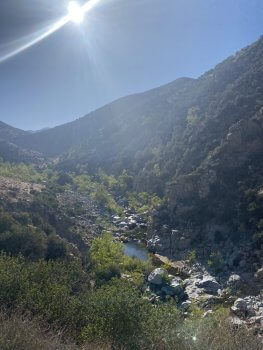 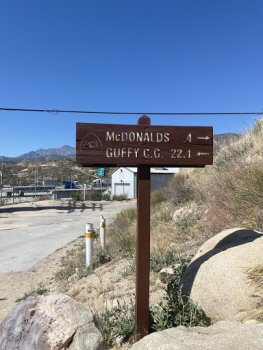 After finally pulling ourselves out of McDonalds we pushed ahead to the next water supply. Incredible trail angels maintain water caches all along the desert section. The next morning we got an early start and left at 5am in a misty darkness. When the sun finally emerged, it revealed a gorgeous cloud inversion beneath us. Legs tired from 3000ft up and 2000 ft down, we stumbled into the little mountain town of Wrightwood. An extremely friendly little community, we were immediately greeted by generous offers of cold water, oranges, and best of all….still frozen Uncrustables! Wrightwood had a fantastic local hardware store which catered to hikers offering a little grassy space to hang out and several hiker boxes where food and gear could be discarded and shared. 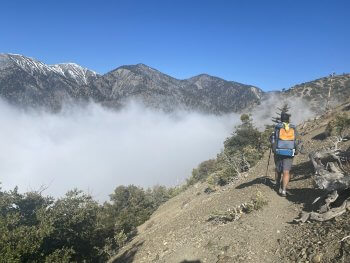 In Wrightwood we enjoyed the hospitality of another trail angel who opened his home to our smelly group of five. For dinner cooked up some scrumptious tacos in his kitchen, hung out with his pup, and exchanged stories. The next morning we climbed back up above the clouds. 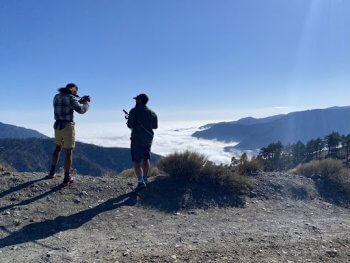 Recharged after rest and food, I decided to take on Mount Baden-Powell by myself while the rest of my group pushed on ahead. Part of the San Gabriel Mountain Range, Baden-Powell was named in honor of the founder of Boy Scouts and at 9406ft was a spectacular climb. 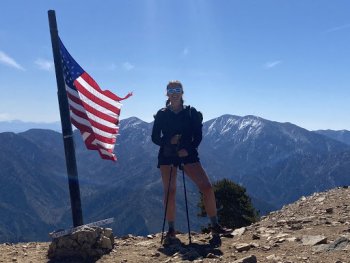 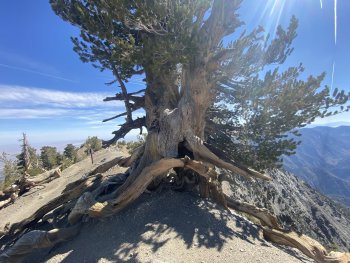 After the descent a large section of trail was closed due to the Bobcat fire in the fall of 2020 in Angeles National Forest. To go around the closure, I walked 22 miles on Highway 2. The road walk was beautiful but definitely took a toll on my shins and joints. At times it was rather treacherous with no shoulder and million dollar sports cars racing past. Apparently driving fast in the Angeles hills is a sport for wealthy LA folk. 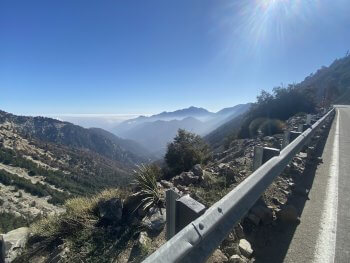 I was grateful to get back on trail the next day, even though the path was completely overgrown by brambles. A 2001 fire destroyed the trees and the increased sun fed the bushes’ massive appetite. 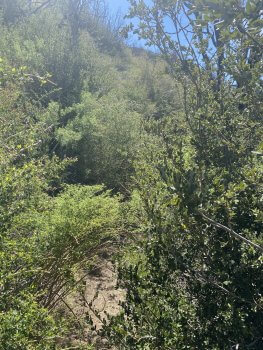 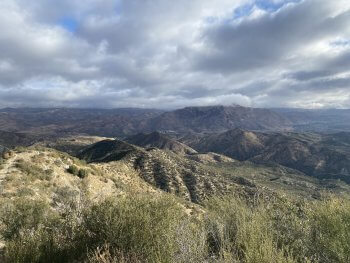 A few days later I descended from the hills into the tiny town of Acton. From there my grandparents picked me up and we spent a day exploring the neighboring city of Palmdale, CA. A city of mostly freeway and fast food restaurants, I found Joshua trees to be the leading attraction. 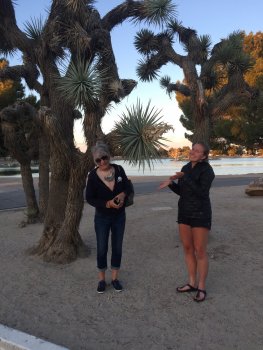 With rested legs, clean gear, and fresh food, I headed back into the desert hills. The trail passed right over the famous San Andres fault line and the convergence of tectonic plates created the striking Vasquez Rock formations.

The next few days were hot and a little monotonous, so we started the mornings well before the sun came up. Eventually we arrived at the notorious Hikertown, a bizarre stop infamous for its western style “cabins”. Themed rooms such as the Sheriffs office, and town hall were available for rent. We didn’t stay the night there, but instead set out on the LA aqueduct. The aqueduct is a 22 mile exposed section of steel pipe and road, best done in the middle of the night to avoid the extreme heat. We left just as the sun started going down, around 7pm, and hiked until sunrise. Exhausted, I didn’t even bother to set up my tent and simply plopped down on my sleeping pad and slept cowboy style. 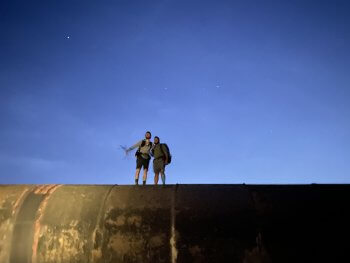 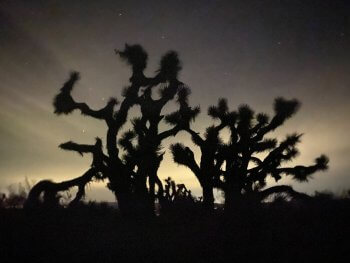 It took a while to recover from this big effort and reset the circadian rhythm. Thankfully we were only a few days away from the town of Tehachapi. We walked through endless wind farms and were pounded by gusts for hours, but we eventually made it! 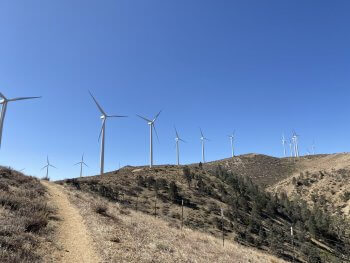 Tehachapi marked just over a month on trail and was a much needed respite. I was lucky enough to connect with two different trail angels and stay with their families. Dirty Chocolate was the dog whisperer and made fast friends with all the dogs we met. 600 miles into the trail with no injuries and great friends, life is good. 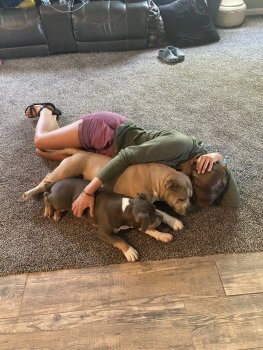 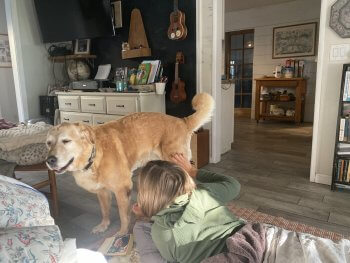 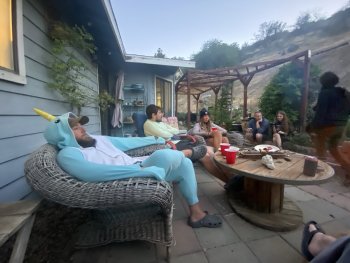