Zoey on the PCT: The Sierras

2 years ago
Lillie Schrock
Zoey on the PCT

At last it was time to enter the Sierra Nevada mountain range. Time for new gear and a new challenge! At Kennedy Meadows South, I met my grandparents once more and picked up my bear canister, microspikes, ice axe, and a few warmer layers. This year the snowpack in the Sierra was only a fraction of previous years so we were able to begin the section nearly a full month earlier than typically possible.

The transition from the desert expanses of Southern California to the high elevation environment of the Sierras came gradually, then all at once. Sagebrush intermixed with Ponderosa and Lodgepole Pines, then Cedar, then Sequoia. Water became more and more abundant. The first night out of Kennedy Meadows, I camped next to a gentle river rolling beneath a bridge adorned with spit nests from the swallows living underneath. As the sun dropped from the sky, so did the swallows. The bridge transformed in an instant into a flurry of activity as wings beat the air all around me.

The next morning offered the first climb of the Sierras. Within an hour, it was clear these hills were a different breed. So steep, the path was more staircase than trail, and rising to elevations yet seen on trail, we were all gasping for breath by the top. The following days were wonder upon wonder. Sweeping expanses of granite rock contrasted with deep red bark and vivid blue sky.

Days grew colder and snow occasionally flurried about me as I hiked. Nights became increasingly frigid as we camped at higher elevations. Waking up three to four times a night shivering became the norm for me and I realized my 20 degree sleeping bag was not quite enough. The first night I camped above 11,000 feet, I awoke to a frozen tent and frozen solid shoes.

It was snowing hard when I arrived at the base camp for Mt. Whitney, the highest peak in the lower 48 at a towering 14,495 ft. In order to ascend the mountain in safer conditions, I decided to wait a day at the camp and let the weather pass. The following day I spent stretching and meditating by the creek, watching Yellow-Bellied Marmots and California Golden Trout, and attempting to eat as little food as possible because I had only brought food for seven days and I was stretching the carry to eight. I was asleep by 6pm and awake by 12:30am to begin the climb!

Fresh snow crunched softly underfoot and hid the trail as I began the ascent in darkness with my friend Chris. Above us the clearest sky I’ve ever seen spilled out and reflected on the dark, still lakes along the trail. In these photos of Chris you can see the edge of the constellations The Big Dipper and Scorpio.

After four hours of gingerly avoiding black ice and weaving our way up switchback after switchback, Chris and I crested the summit moments before the sun did the same. Warm light illuminated the valley before us. Beautiful as it was, I was miserable. It was freezing at the top (by our estimates less than 10 degrees) and the cold burn of my hands terrified me. Fearing frostbite and fighting back tears, I left my group and hustled down the mountain.

That morning redefined my definition of being cold.

The next day was nearly as epic. With our legs still tired from Whitney, it was time for the highest pass on the PCT, Forester Pass. In high snow years, this stretch has some of the most dangerous mountaineering obstacles. Thankfully Chris, Captain Steve, and I had very little trouble and the day turned out to be glorious.

The top of the pass stood at 13,153 feet and marked the entrance into Kings Canyon National Park. After glissading and bounding down the pass, we stopped for celebratory snow cones made with Mio electrolyte mix.

Water melted from every peak and descended down the mountain with us. As trickles turned to streams and streams to rivers, I had my first taste of the river crossings to come.

Portions were humble but we roasted the trout by the fire and watched the sun set on the granite peak beside us.

Extremely tired and completely out of food, we made our way off trail via Kearsarge Pass to access the town of Bishop. Winds absolutely battered us as we climbed..warning of the intense storm on the forecast.

Rather than put ourselves at risk in a blizzard, we decided to spend a few days at the Hostel California in Bishop. Not only did the hostel have much needed showers, they offered loaner clothes for hikers doing laundry and bikes to explore the town. Burp King modeling his classy loaner suit: 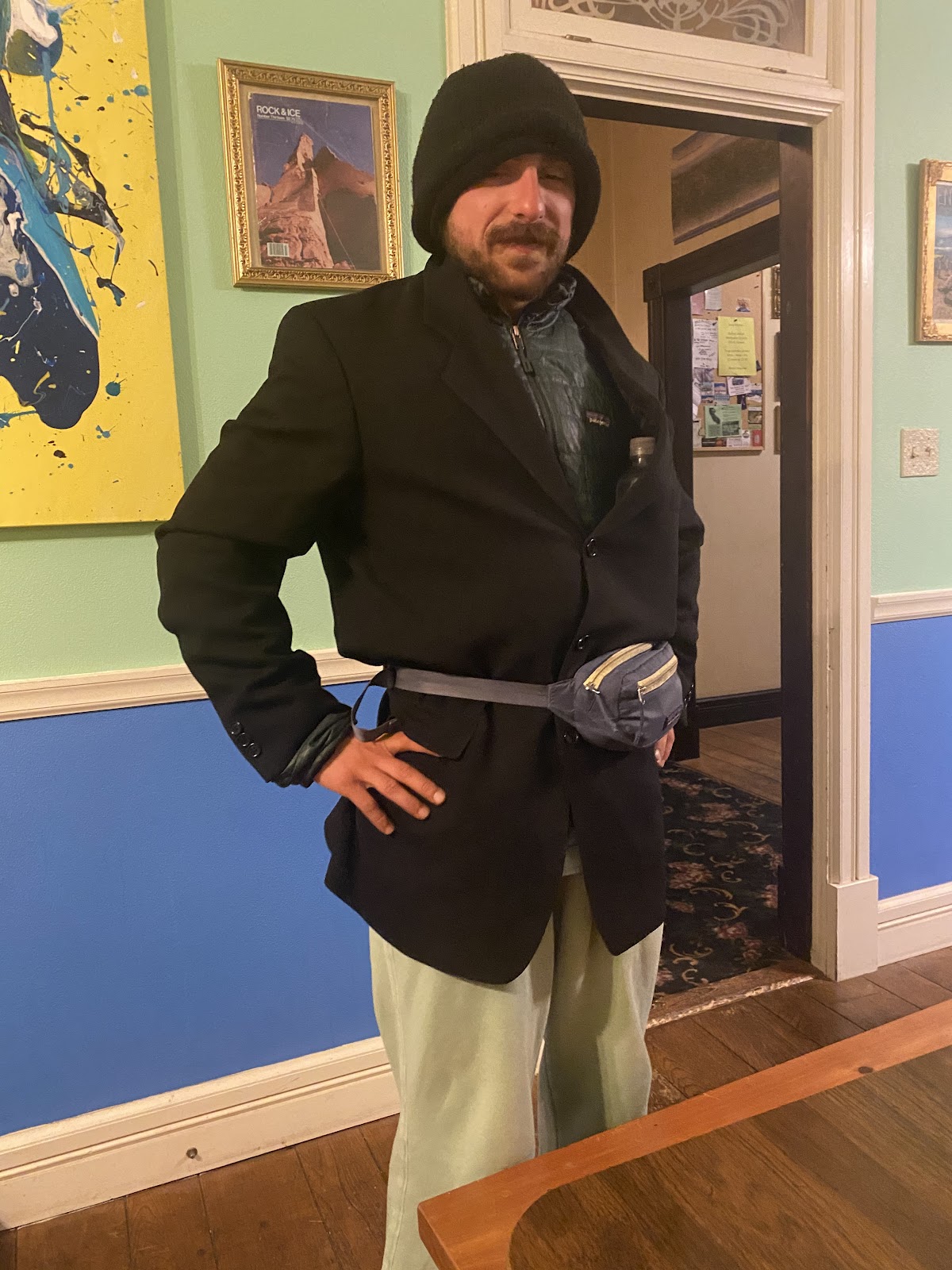 I absolutely loved Bishop. Between the world-shattering bakery, wide selection of gear stores, lush tree-lined streets and overall amazing atmosphere it might be my favorite trail town of the trip. The mountains called though and I soon hitched back to trail.

After returning to trail via Kearsarge Pass I met up with a different group of friends who call themselves the U-haul crew (after they all hitched a ride in a U-Haul of course). The next eight days were a dance between 8,000 and 12,000 feet as we completed pass after pass. The climbs were exhilarating. The landscape felt so foreign and dramatic that each turn of the trail was surreal. Challenging as the hiking was, by far the hardest part of each day was getting out of my warm sleeping bag in the chilly morning.

Most nights we made a fire (as long as we were camped under 10,000 feet as per regulation) and roasted everything from cheese sticks to oranges on the flames.

After Muir Pass, my trail family parted ways. Traveling alone gave me a new appreciation for the extreme remoteness of this section of trail. I hadn’t seen a car in eight days; the longest stretch in my living memory. The sound of planes were few and the sight of other people rarer still. The isolation was thrilling. Even when I found myself alone following fresh mountain lion prints in the snow it was fun.

Feeling somehow the strongest I’d ever felt and simultaneously the most beat down, I made it to Mammoth Lakes. There I met up with Captain Steve, Chris, Clydesdale, and Woo-hoo (pictured beneath from left to right) and we traveled into Yosemite Valley to explore.

First stop was El Captain. If you zoom in close enough you can see little specks on the wall. Other onlookers told us that one speck was Sanni Honnold, wife of Alex Honnold, the incredible climber featured in the movie Free Solo (although I can’t confirm this).

Returning to trail, we kept traveling north through Yosemite National Park and the terrain gradually began to mellow.

The last climb before Sonora Pass was long gradual switch backs traversing skree fields dotted with the occasional patch of snow. Wild winds blasted me with such strength my skin stung and I could not hear myself shout. If only I could include a video of the madness.

Although the morning was brutal, it took a miraculous turn when I ran into my parents hiking south-bound on the trail! In their packs they carried the most beautiful sight I could imagine…

The three of us spent the night in a cabin in Kennedy Meadows North. The resort’s dog got lots of lovin from all us hikers missing our pups at home. Refreshed and in high spirits, I hit the trail again to take on NorCal!

The story of my trail name:

Around mile 250, near Big Bear City, I’d been hiking alone for hours and grew rather bored. For entertainment purposes I attempted to perform renditions of songs as if I were playing them on a kazoo. While I was deeply engrossed in this important work, I stumbled upon a couple of section hikers who asked my name. I misheard them and assumed they asked what I was doing and blurted out “kazoo”! Just like that the name stuck. A few hundred miles later I packed out a dozen kazoos to share with other hikers. Soon we had a full chorus of kazoos buzzing together.